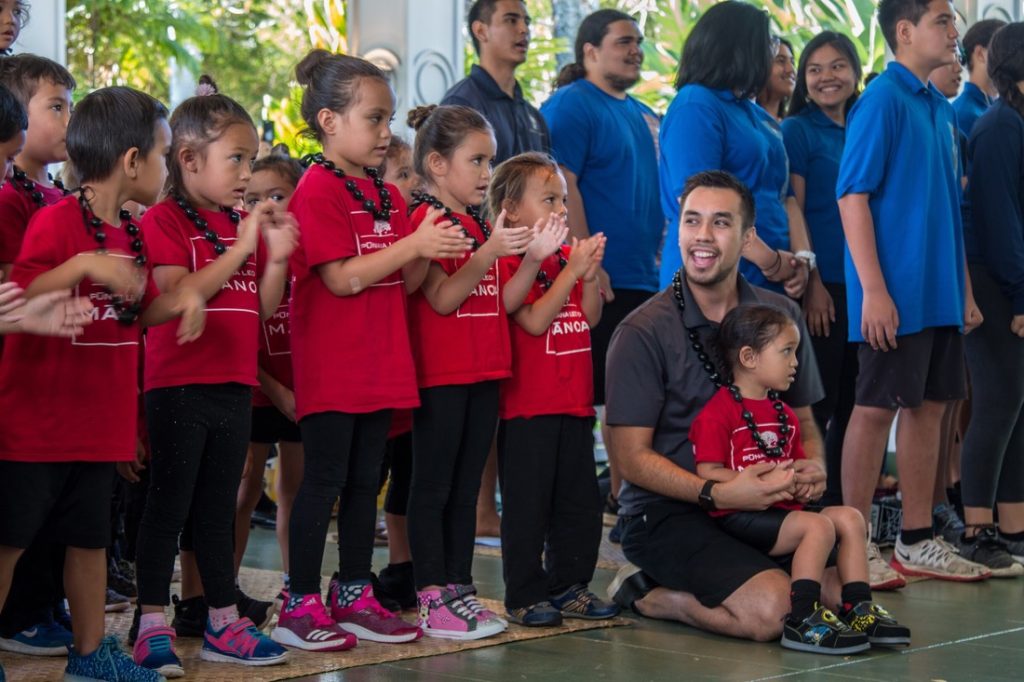 ILI Fellow Kahōkū Lindsey-Asing helped promote “Ōlelo Hawaiʻi Month” in February that celebrates and encourages the use and normalization of Hawaiian language. Here is his perspective and experience from this year’s activities:

“…for me, every month is about celebrating, encouraging, and normalizing Hawaiian language. ”

What is the history and context of “Ōlelo Hawaiʻi Month?”
It’s interesting, because for me, every month – actually every day – is about celebrating, encouraging, and normalizing Hawaiian language. But, it’s good to have these more popularly recognized moments to get other people engaged at any level. “Ōlelo Hawaiʻi Month” was officially recognized in a state Act in 2012. More recently, 2018 was declared as “Year of the Hawaiian – Ke Au Hawai’i.” So there has been a lot of public attention and engagement around Hawaiian culture and language.

After the annexation of Hawaii as a territory of the United States in 1898, the language was officially banned from schools and the government. Use of the Hawaiian language was even banned at Kamehameha Schools – a private school system reserved only for children of Hawaiian descent.

LEARN MORE ABOUT THE CONTEXT OF HAWAIIAN LANGUAGE REVITALIZATION HERE.

Why is “Ōlelo Hawaiʻi Month” significant for you?
​More people are aware. It has become an annual thing for people who don’t usually speak Hawaiian. It’s a great way to encourage people to pick up even a little of the language – or to take this opportunity to practice more. Having a dedicated month like this focuses on the idea of education, which is very important to me. I am the site coordinator for Pūnana Leo o Mānoa – one of 12 Hawaiian language immersion preschools in the state. Alongside the fun and random things you might see on YouTube or TV about Hawaiian language during this month, those of us who teach it seriously can try to really help people through encouragement. Sometimes when people try to speak, they are worried they will be judged. So, I try really hard to make any correction with love and attention so people feel good about learning.​
What activities happen to celebrate the month?
There are panel discussions and educational activities. There is also a Hawaiian Language Festival where we get to participate along with 3 other Hawaiian language preschools like ours. This year, instead of hosting the festival, we are taking 6 families on a weekend trip to Hilo to visit a sister pre-school and attend their festival and concert series.We were able to get almost everything fully funded, so it’s really a great opportunity for our kids and their families to visit another island and see that other kids are learning and experiencing Hawaiian language and culture the same way. We take the pedagogy of the Hawaiian language really seriously – English is not allowed in 90% of the areas of our schools, even for parents. By visiting other schools, our families get to feel the support and connection to other families doing the same thing. 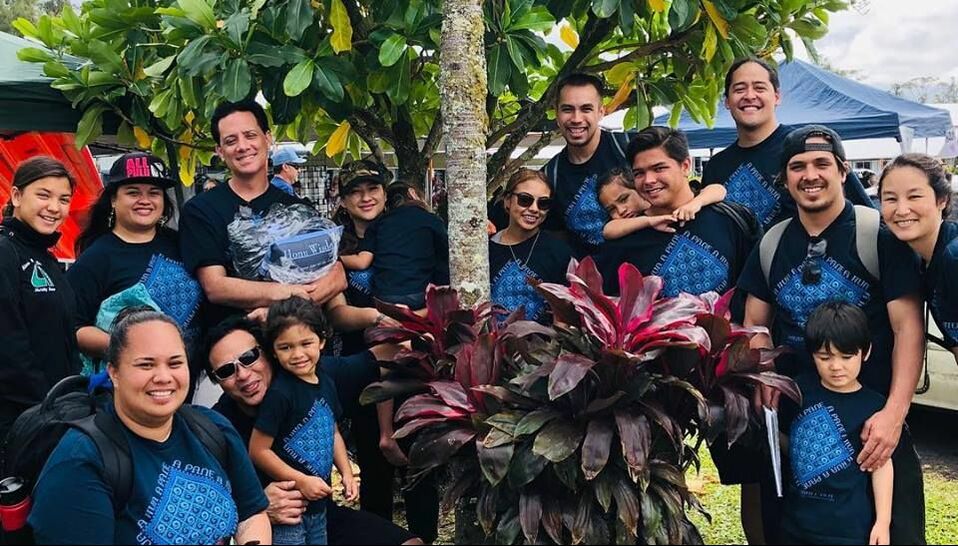 “I originally thought I’d go into the hospitality industry because it was a super friendly and sharing atmosphere. As I was almost ready to graduate, I thought about how that would be a fun job, but wouldn’t help my community.”

How does this time of year connect to your involvement as an ILI Fellow and as a cultural leader?
I always wanted to be immersed in Hawaiian language and culture since Kindergarten. My parents are native speakers, grandparents, my siblings – everyone in my family, really. When I got out of high school, I originally thought I’d go into the hospitality industry because it was a super friendly and sharing atmosphere. As I was almost ready to graduate, I thought about how that would be a fun job, but wouldn’t help my community. That was more important to me and I took quick steps to shift to early education with a Hawaiian language focus. I started as a teacher in 2015, became a lead teacher and now am Head of School, which is like a principal.I see our schools as feeder schools to prepare students for elementary and secondary schools where they may have some Hawaiian, but not as an immersion. Our kids represent a solid foundation in the structure of the language, which is important for maintaining its legacy. Nearly 60% of people in Hawaii have some knowledge of Hawaiian language – even our ATMs have it as a personal preference – but there is a difference between formal education of it and we represent that aspect.
I’m excited that young adults are becoming more interested in Hawaiian language and taking it to their careers. It’s more than just studying it to connect to roots, which is really important on its own. But, more college students are studying Hawaiian language so the can take it into whatever field they are going into – to help their own communities.​
What is coming up next for you?
I am honored to also have the position of Director of the Youth Ambassador Program for the Festival of Pacific Arts 2020, which will be hosted in Hawai’i and directed by ILI partner and director of PA’I Foundation Vicky Holt Takamine. I’m about to fly to New Zealand for 8 days to build connections to other youth leaders among Pacific Nation people in preparation. It’s a huge festival, so I’m really excited about everything that is going to be involved. I’ll be attending their traditional dance festival, meeting with dignitaries and getting things in motion.That is going to be really great for me because I am deeply connected to our native dance as well. In our culture, language and dance are connected, so you need to know what you are dancing about to really do it well. Each song you want to be able to feel it and understand its meaning. 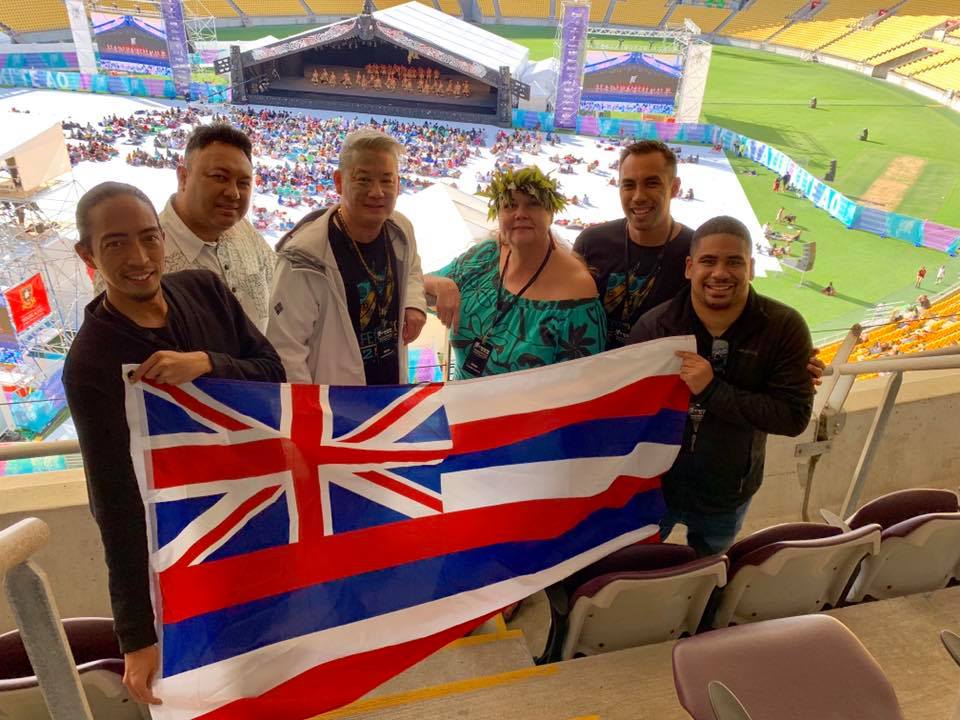 Festival of Pacific Arts 2020 Hawaiʻi Delegation hosted at Te Matatini Kapa Haka Festival 2019 by Creative New Zealand.
“Interculturality” is at the core of the ILI Leadership program. How does it relate to your work and your journey? What does it mean to you?
Whenever I hear anyone speaking any native language – or anything other than English – I think, “this is a natural thing.” Even if I don’t understand it, it feels familiar. The Lakota words and phrases we heard while at the first ILI intensive in Lakota territory sounded very different from Hawaiian, but I could relate to it. Just like I found myself relating to other ILI Fellows, regardless of different backgrounds. It’s a shared experience.
Kahōkūʻalohiokeao Lindsey-Asing is a Site Coordinator of Pūnana Leo o Mānoa Hawaiian Medium Education Preschool; as part of the statewide ʻAha Pūnana Leo non-profit organization. The mission “E ola ka ʻōlelo Hawaiʻi- The Hawaiian language shall live” and vision “E hoʻoulu i ke kaiaʻōlelo Hawaiʻi no ko Hawaiʻi nei i mau aku ʻo Hawaiʻi he ʻāina Aloha- Drive and inspire change to ensure a living Hawaiian language in Hawaiʻi and beyond” of ʻAha Pūnana Leo are guiding principles that inspire Kahōkū to continue on this path of language perpetuation. Another major role in his life is being a proud haumāna hula- hula student of Pua Aliʻi ʻIlima under the direction of Vicky Holt-Takamine & Jeffrey Kānekaʻiwilani Takamine. Kahōkū is a frequent volunteer with PAʻI Foundation,  a 2018-2019 Intercultural Leadership Institute Fellow, and is currently serving as the Director of Nā Pūkoʻa: Youth Ambassador Program for Festival of Pacific Arts 2020.