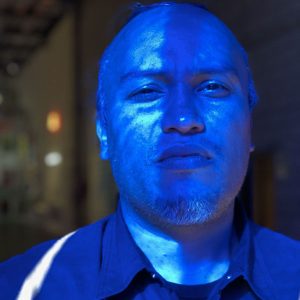 Co-Founder/Director
Meztli Projects
Joel Garcia (Huichol) is an Indigenous artist and cultural organizer that uses Indigenous-based frameworks to center those most impacted, and arts-based strategies such as printmaking, installations, creative action, and altar-making to raise awareness of issues facing underserved communities, youth, and other targeted populations garnering national press in publications such as the LA Times and Artforum among others. In various roles, he has worked with Indigenous communities across borders in support of issues of land, access, and self-determination. His work explores healing and reconciliation, as well as memory and place. He previously served as Co-Director at Self Help Graphics & Art (‘10-’18) a nationally acclaimed arts organization and is the co-founder of Meztli Projects, an Indigenous-based arts & culture collaborative.

His work has been shown in museums and covered by the national press centering on his lived experience using it to bridge understanding between communities, while also deconstructing how we understand race, indigeneity, class, and other forms of identity for the purpose of supporting those most impacted. Joel is a current fellow of Monument Lab’s ReGeneration project and guest contributor at Zocalo Public Square, and has previously worked with or participated as an Artist-In-Residence with organizations such as the Goethe-Institut, Oxy Arts at Occidental College, AIR at the LA Cleantech Incubator, the Intercultural Leadership Institute among other local and international entities.