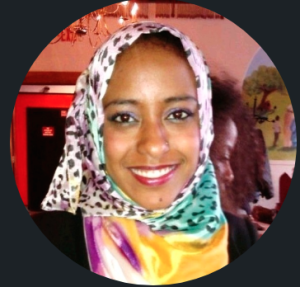 Lolla has held various roles in media and storytelling, arts-based organizing with African and Muslim immigrants in Minnesota, and community development. As the founder of the East African Diaspora Artists Initiative,  Lolla has created platforms for peace and understanding between East African, Afro-Arab, and Black American Muslim diasporas. She’s a trainee-fellow with the African-Middle East Leadership Project (AMEL) for human rights, and a proud inaugural alum of the Intercultural Leadership Institute and the IMAN (Inner-city Muslim Action Network Chicago) Artist Roster. Lolla is also an alum of the National Art Strategies Creative Communities Fellows, Institute on Political Journalism, and has received various fellowships and awards for her work in journalism, storytelling, arts advocacy, and human rights.

She dreams of a world in which the cultural, intellectual, and spiritual heritage of Africans and their descendants in the diaspora are recognized, their unique cosmological imprint on global civilization acknowledged, and their intergenerational traumas healed.