He Sapa Tanyan Yahi / WELCOME TO HE SAPA 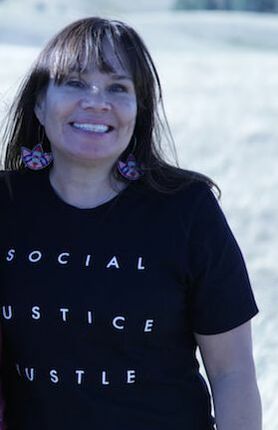 My Lakota name was given to me by my Unci Olivia Black Elk Pourier who made her journey to the Wanagi Yata (the place of the Spirits) when my daughter Shahiyela, now 19, was 8 years old.During your stay you will learn about the Lakol Wicho’an (the Lakota Way of Life) and how we are taught that our life here on Unci Maka (Grandmother Earth) mirrors the stars (Lakota cosmologies). Our Creation Story begins in the Black Hills. Through story and in practice you will learn about the Lakota virtues of Woksape (Wisdom), Woohitika (Bravery) Wowacintanka (Fortitude) and Wacantognaka (Generosity).

An historic event in He Sapa occurred recently. The name of the highest peak in He Sapa (directly behind Mount Rushmore) was changed from “Harney Peak” after Civil War Gen. William S. Harney, a “hero” of the “Indian Wars” to Black Elk Peak. I wrote about the history of this traditional Lakota spiritual and ceremonial location in an article published in the National Endowment for the Arts (NEA) 50th Anniversary publication, How to do Creative-Placemaking. Contributors to the publication also include ILI partners, Carlton Turner and Maria DeLeon. At the time of my submission I had no idea that the name change would occur. The change was mandated by the U.S. Board of Geographic Names, against the will of South Dakota’s governor and two senators. John Niedhart wrote about my grandmother’s grandfather Nicholas Black Elk (1863- 1950) in the book, Black Elk Speaks. As a child Black Elk lived in He Sapa where he had his vision at the age of 9 (near “Harney Peak”). In his vision, the Six Grandfathers would visit Black Elk, take him to the stars and teach him the spiritual ways to follow. At the age of 19 he would become a holy man. By 1868 his world would change forever.In 1874 Lt. Col. Armstrong Custer led a military expedition in He Sapa and reported he discovered gold. The gold rush that followed violated the 1868 Ft. Laramie Treaty. The “Great Sioux Nation” or Tintunwan (Teton) Treaty territory included western South Dakota, and lands east of the Missouri river into the Big Horn Mountains in Wyoming. Eight years after the treaty was signed, in 1876, the Lakota, Cheyenne and Arapahoe at the Battle of Little Bighorn killed Custer and nearly all of his troops. Black Elk witnessed the Battle of Little Bighorn as well as the 1890 massacre at Wounded Knee. By 1910 our treaty land had diminished to the present-day nine Indian reservations in South Dakota, a fraction of the original treaty-designated land.

“The name change of Black Elk Peak may seem like a minor gesture, but in a part of the country deeply embedded in stolen lands and attempts at forced assimilation designed to wipe out the “Great Sioux Nation”, it represents a beginning.”

The name change of Black Elk Peak may seem like a minor gesture, but in a part of the country deeply embedded in stolen lands and attempts at forced assimilation designed to wipe out the “Great Sioux Nation”, it represents a beginning. A beginning where our children who had little opportunity to visit the sacred sites in He Sapa or to learn their history and are constantly shown negative stories about themselves and their local community on local and national news will have an opportunity to see themselves through Lakota eyes.In 1970, the Pine Ridge Indian Reservation would gain national attention when the American Indian Movement (AIM) occupied Wounded Knee, led by Russell Means (Oglala) and Dennis Banks (Ojibwe) and more than 200 Indian activists over a 71-day standoff. The siege at Wounded Knee followed AIM’s occupation at Alcatraz and the Bureau of Indian Affairs offices in Washington, D.C. Martial law was in effect on my homelands. In June of 1975, I was on a school bus coming from a softball game in Oglala when our bus was stopped abruptly as we watched F.B.I. agents as they surrounded the Jumping Bull ranch. A shoot-out followed. As we grew older we would come to understand more about the incident at the “Jumping Bull Compound” as the F.B.I. documents depicted actual events. AIM activist Leonard Peltier was arrested for the murder of an F.B.I. agent and is serving two consecutive life sentences. Between 1970 and into the early 1980s American Indians would experience entrenched racism throughout South Dakota and the impact lingers today. Our community would experience one of the highest death rates and unsolved murder rates in the country.
​
The Oglala Lakota Nation (Oglala Sioux Tribe) has approximately 38,000 enrolled tribal members living on the “Rez” with a land base of 2.8 million acres, a geographic expanse roughly the size of Connecticut. In 2004 Cecelia Fire Thunder, (Oglala Lakota) became the Oglala Sioux Tribe’s first woman president in the history our Tribe. First Peoples Fund’s work on Pine Ridge with our nonprofit organizations, artists and culture bearers has shed positive light on the homelands of the Oglalas. The Creative Economy market study conducted in 2013 on Pine Ridge revealed that arts and traditional practices are deeply rooted within the majority of family households. Fifty-one percent (51%) of households depend on home-based enterprises for cash income and 79% of that enterprise consists of traditional arts and cultural practices. Today nearly 40% of households include practicing artists. The Rolling Rez Arts mobile unit has reached more than 600 artists in three years with arts and business workshops and expanded the reach of the reservation’s first federally insured banking institution, Lakota Federal Credit Union, to nearly 10% of the population, helping grow its deposits to $4.5 million. Later this year, First Peoples Fund, Lakota Funds and Artspace will break ground on the Oglala Lakota Artspace near the Oglala Lakota College campus. Oglala Lakota Artspace will be the reservation’s first studio, gallery, business incubator, and gathering space for artists, serve as a home base for Rolling Rez Arts and First Peoples Fund’s youth development through spoken word program, Dances with Words, and Lakota Federal Credit Union will have a storefront in the new facility. We look forward to sharing how our national work impacts one community.​As you depart He Sapa and our homelands we hope you will have a better understanding of Indian Country, the resiliency of our tribal members, how we carry ourselves while upholding our Lakota virtues, and our relationship to each other and as stewards of our ancestral homelands. Lila wopila tanka. Toksa ake wachiyankin kte.