LEADING THE WAY TO STATUE REMOVAL

ILI Fellow Joel Garciawas an integral part of the community effort to remove the Columbus statue from Grand Park in downtown Los Angeles. Learn how it happened. 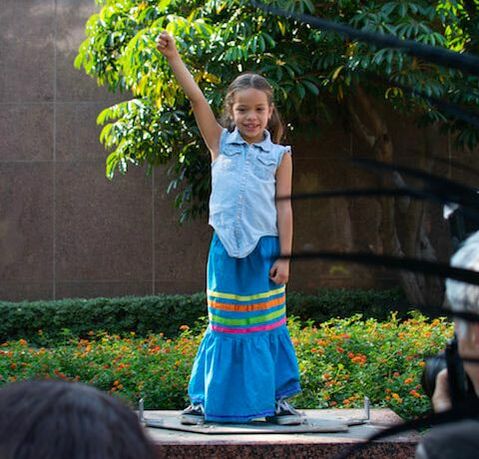 6-year old Farrah a Mvskoke member stands with her fist raised where the Columbus Statue stood just minutes ago. Photo by Kenneth Lopez

“Do good work, do good research and it pays off.”

On November 10, 2018 a statue of Christopher Columbus was taken down after standing 45 years in Los Angeles’ Grand Park. Amid a healing ceremony conducted by community leaders, families and youth activists, ILI Fellow Joel Garcia witnessed the culmination of years of work to advocate for its removal. The backstory of this event shows how critical place, community and process are in making cultural change and demonstrates intercultural leadership in action.For 20 years, local indigenous families have been protesting the presence of the Columbus statue in Grand Park. An increase in awareness-raising by one specific family starting on Indigenous People’s Day, 2013 coincided with Joel’s work to program a Día de los Muertos event in the park. “Each year, we found ourselves trying to figure out the best way to create an event that honored ancestors, but we were faced with a statue that celebrated a 500-year-old symbol of genocide and oppression,” says Joel about the origins of the movement to remove the statue. “Even within the native community in L.A., many people didn’t know that there was a Columbus statue in Grand Park. We needed to do something to heighten awareness and call for action.” 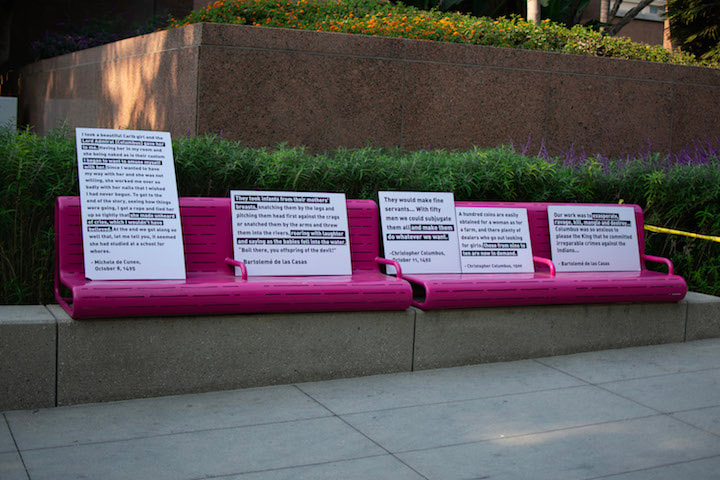 Signs created by artist Daniel Gonzalez containing horrific quotes from Christopher Columbus and crew. Photo by Kenneth Lopez
On the heels of having Indigenous Peoples Day replace Columbus Day in Los Angeles, awareness of the statute was built through social media posts that then caught the attention of L.A. City Council. With everyone’s eyes on the topic, Joel and other organizers found an opportunity to push the issue of removal to the forefront. “Knowing when to say ‘go’ is really critical,” Joel explains. “There was a critical mass of interest and activity and that caught the attention of City Council, the County Board of Supervisors and the Native American Indian Commission (NAIC). There was definitely movement, but getting political acknowledgement is one thing. Bringing about action is another.”

“Knowing when to say ‘go’ is really critical.”

Political leaders agreed that the statue should be removed, but pressure from a smaller but politically engaged constituency heightened the debate over the action.  “This is the point where organizers really need to let a community take its course. We continued to be strong advocates, but tried not to interrupt a process that had already begun,” says Joel.
The process was lengthy and complicated. The issue was handed off to the L.A. County Art Commission with a charge to engage the County Supervisor, Human Relations, NAIC to develop a plan to remove the monument. Organizers called for more than removal – there was also a call to deaccession the piece from the list of county holdings. For a year, the issue was on the agenda at each Art Commission meeting for review.Originally, the removal was slated to happen before the first officially recognized Indigenous Peoples Day in Los Angeles on October 8, 2018, but process stalled and set back organizing plans by 6 months.

“This process was a direct example of ‘interculturality’,” Joel explains. “It shows how we show up for one another. The event was being closely aligned with Indigenous Peoples Day, which in L.A. was mostly seen through the lens of a Northern Native American perspective. For me and other folks, we held space to remember that the first peoples affected by Columbus were from the Caribbean Islands and it was important to also include the Taino perspective and experience.” 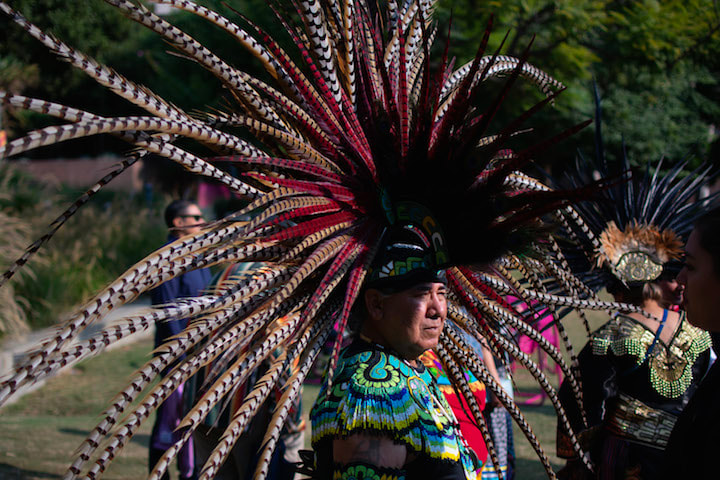 Danza Mexica elder, one of many tribal elders present to participate in the ceremonies. Photo by Kenneth Lopez
Meanwhile, it was important to keep the issue at the forefront. In October 2017, Joel collaborated with an artist of Taino ancestry, Tanya “NenaSouFly” Melendez to transform the Columbus statue into an altar of remembrance for the Taino people. ​Throughout 2018, discussions were happening about removal and deaccession. The NAIC and Arts Commission hosted community meetings that upheld a County policy to address any concerns about an artwork if there was consistent objection from the community.

“The initial community meetings were more like ‘listening sessions’,” says Joel. “There were a lot of people involved and some big disconnects with the Arts Commission. There is a Cultural Equity & Inclusion initiative in place in L.A. and a Civic Art Committee established, but the process was getting bogged down. What made me push harder was the arts perspective. For me, how museums and collections are able to control public display and perception of art is of the utmost importance. That made this issue high stakes, in my opinion. The additional background I learned about indigenous rights during the ILI Lakota Territory intensive in September gave me valuable tools to be able to push harder when I got back to my own community.”

“What made me push harder was the arts perspective. The additional background I learned about indigenous rights during the ILI Lakota Territory intensive in September gave me valuable tools to be able to push harder when I got back to my own community.” 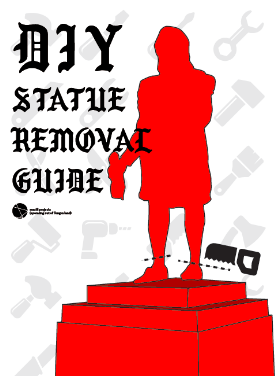 As things continued to stall, Joel and other organizers searched for ways to keep action in motion. Along withMeztli Projects, an indigenous arts & culture group, Joel helped create an artistic statement through the DIY Statue Removal Guide. Distributed through social media, the Guide reached people across the country and created an open source touchstone for everyone dealing with the issues of monuments that celebrate oppression, genocide and hate.“This got attention, but what really pushed the topic over the edge was the coordinated effort to get community voices of all kinds heard at an Arts Commission meeting in October,” explains Joel. “Families shared personal testimonies. Native artists represented their perspectives. Youth experiences showed how they are affected by the stories of Columbus at school. That made a huge impact. Commissioners said that was the first time they had heard this information in this way. It exposed some serious gaps in communication and more importantly, touched the conscience of decision-makers.”

“This got attention, but what really pushed the topic over the edge was the coordinated effort to get community voices of all kinds heard…”

The optics of how the community was engaging were critical to a shift toward resolution. Political pressure and public embarrassment increased activity and the next step the Commission took was toput a black box around the statue with a statement from the native community. Artist Tanya “NenaSouFly” Melendez was finally able to complete the altar piece attempted in 2017, which drew attention and made the process really apparent.
The Arts Commission must report their activities monthly. In previous years, their priorities have not included the existing Cultural Equity & Inclusion Initiative and little impact on Native Americans (less than 1% of arts integrations programs reach native communities). With mounting pressure from the community, action needed to happen.“They just had to do it. The open question, though, was the deaccessioning process, which was an absolute demand from the community,” Joel explains. There was an agreement to remove the statue and store it until that process could be finalized. “There is still a lot of work to do around the deaccession. It is important that there is some control over where the statue ends up after it is purged from County collection and how it is displayed.”

But Saturday, November 10, 2018 was a day to mark an important accomplishment.Community leaders, families, youth, artists and others gathered to witness the removal and honor ancestors, including members of the city’s local indigenous Tongva/Gabrielinos and Tataviam nations.

Rudy Ortega, Chairman of the Los Angeles City/County Native American Indian Commission and Tribal President of the Fernandeño Tataviam Band of Mission Indians alongside Mitch O’Farrell the sole Indigenous member of the City Council hold a vigil prior to the removal of the statue. Photo by Kenneth Lopez 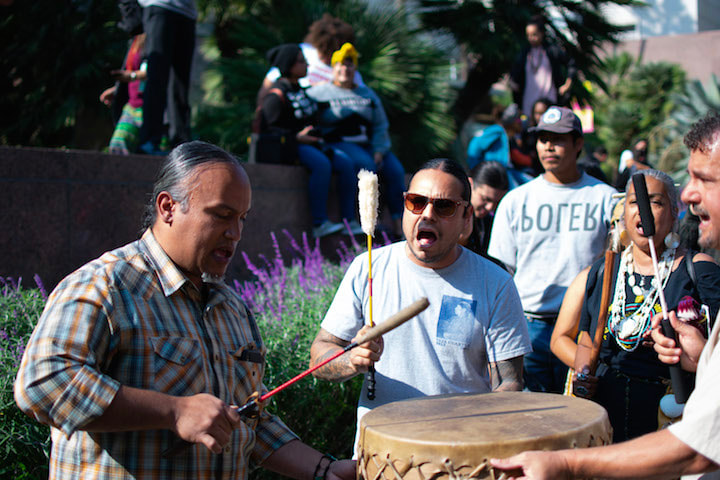 Joel Garcia alongside community members sing songs as the statue is being removed. Photo by Kenneth Lopez
“It was hard for me to see the actual removal because I was on the side drumming,” remembers Joel. “But I did see them start. They took the bolts out by hand – it seemed so effortless. It was a real-life example of the simplest removal technique in the DIY Guide and that’s when I realized how all our hard work and authentic engagement had made an impact. Do good work, do good research and it pays off.”The impact was wide. After social media transmitted the story, it went viral with half a million views on just one post by Sean King.

“You don’t take personal credit. We wouldn’t be able to do it without the community and trust. You take responsibility for keeping the process moving. Since this is a beginning and not an end, it’s hard to mark with celebration and really feel what’s happening in the moment. You want to enjoy the small and big wins, so I was excited to see social media blow up. But, you hope that people experience it in the way one shares it. You want the folks who are on the fence to see it – and to change hearts and minds globally. That means you have to keep working, even after each win.”

Joel Garcia is an artist, arts administrator and cultural organizer with over 20 years of experience organizing workshops, events and festivals in over 20 cities across the Americas. He is the former Co-Director,Programs & Operations at Self Help Graphics & Art, a nationally recognized center for Latino arts that develops and nurtures artists through printmaking and multi-media forms of art-making. Read more about Joel here.