ILI Fellow Tara Moses played a key role in decolonizing Tulsa’s Day of the Dead activities in Fall 2018. Here’s how her involvement and her perspectives as an intercultural leader came together to add a new dimension to a traditional community event.

Please tell us about the context for the events…
Living Arts of Tulsa hosted the annual Day of the Dead Festival in Tulsa, Oklahoma. It was a celebration that originated in a backyard over 20 years ago, and now over 10,000 people attend. I was on the planning committee and specifically the chair of the Education subcommittee. I also planned and hosted four events in the following two weeks after the festival for the greater Tulsa community that were connected to the idea of decolonized death.
​
I directed a bilingual performances of Hamlet: El Príncipe de Denmark which was a critique of colonization. Claudius, an Indigenous Mexican man killed his brother like colonizers trying to obtain power – only for it all to fall apart because colonization is never good. As the saying goes, “To thine own self be true.” 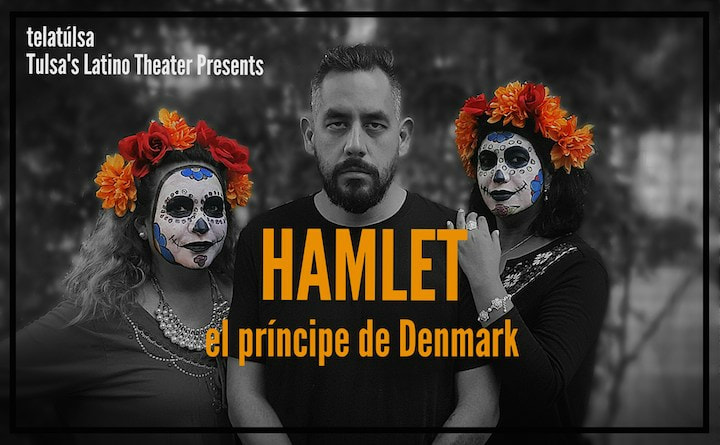 A craft night of paper flower making brought people together for “Culture Crafts: Papel de Flores.” We screened the movie “Coco,” which is about the personal and social connections to death. And we hosted a community roundtable discussion on the idea of decolonizing death.
The thought behind these events was to include as many people in Tulsa as possible in various types of events: family-friendly, theatre-goers, tangible and take home crafts, and those who like to kick back and watch a movie. This was an effort to use a multi-tactic approach to engage people in Latinx culture who may have never engaged before as well as serve as a celebration of our Latinx community in Tulsa.

“The colonized way of viewing death is not the way Indigenous people from around the world experienced it.” 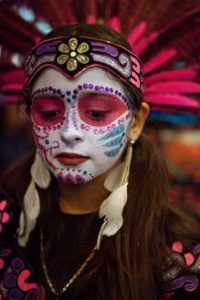 What is “Decolonizing Death?”
Decolonizing death is viewing death and the ceremonies surrounding death outside of a colonized lens. Currently in the United States, the “standard” is a Puritan, Christian, Euro-centric view of death: heaven/hell, wear black, sad environment, don’t speak of death, fear of death, children are shielded from death, etc. That way of viewing death is not the way Indigenous people from around the world experienced it. For our activities, we used the Indigenous Aztec practices of mesoamerica as the guidepost. Those individuals regarded death as a celebration of one’s life that hasn’t ended. The ancestors that have passed come back to visit the living every single year. Now we know of this as Day of the Dead or Dia de los Muertos, however the holiday lasted multiple days with each day being for a certain purpose: those who died as children, those who were murdered, etc. Alters are created with pictures of the loved ones, with marigold petals leading the way with their familiar scent, as well as coffee beans or tequila as their scent is strong and can help the spirits find their way back. Death is something to be celebrated, year after year.
​
So how do we see this in our contemporary lives? Many individuals throughout the Americas celebrate this holiday, but what I think is a beautiful example of decolonizing death is that marigolds, the papeles de flores, papel picado, the specific type of bread, that you see during these celebrations are used throughout the year for every kind of celebration. They aren’t specifically “death decorations”. Unlike the colonized notion of death of being this singular, dark event that we try to not talk about, for a huge group of Indigenous peoples it’s part of their everyday lives.The question remains of how do we decolonize death? You can practice your Indigenous practices. Those who hail from Europe who’s practices are the colonized form can decolonize their minds and language by acknowledging that there are different ways to regard death. There are different practices surrounding death. The Euro-centric “standard” is not a standard. There is no one way or “general way” people experience and regard death. It’s that simple.

How did “Interculturality” fit into this work for you?
I am an Indigenous person who does not identify as Latinx. So for me I consulted with Latinx members of the committee and of the greater Tulsa community on every event. For the panel on decolonizing death, I asked a professor of Spanish Literature and member of a Latinx family to co-facilitate, and they took the lead on the history of the holiday and how it’s celebrated today, whereas I spoke about what decolonization is and how we can do it.

“If we designed these events with the intention to uplift the Latinx community of Tulsa and to open the doors to non-Latinx peoples to explore how this celebration intersects with their individual practices, we would be able to steward an intercultural connection…”

I directed Hamlet, so in addition to only casting Latinx and Indigenous peoples, the story that we told was centered on Indigenous practices, and for the parts that were Mexico-specific I consulted with members from the community to take the lead and keep me accountable. Furthermore, what I think really made this work was that I was 100% transparent about what I was doing, what my intentions were, and what I was hoping to accomplish. Because of the joint effort, we were able to make this year’s theme of “Uno Puente” or “One Bridge” a success. This was a theme that I pitched in the first committee meeting because appropriation comes from a lack of education. If we designed these events with the intention to uplift the Latinx community of Tulsa and to open the doors to non-Latinx peoples to explore how this celebration intersects with their individual practices, we would be able to steward an intercultural connection, conversation, and mutual respect which has never happened in Tulsa before. And it worked.
​
How do you see this project as related to your own leadership in arts & culture work?
As a Native theatre artist, all my work is about decolonization. Decolonization of theatre. Decolonization of the stories that are told on the mainstages of the American theater. Serving on this committee and serving the Latinx community of Tulsa was a beautiful intersection of that. Decolonization isn’t a Natives only issue. It isn’t a Latinx only issue. It’s something that affects every single person in this country, in the world nearly.

“I think that’s what intercultural work needs the most: clear definitions and explicit intentions.”

What were the most surprising outcomes of this work for you? What were some of the a-ha moments for the people who participated?
I was the most surprised by the overall support of Tulsa. Doing work that centers one marginalized group usually comes with some pushback, but not in this case. I think because we were upfront about what this festival is (a celebration of a Latinx holiday) and who it was for (Latinx people and other peoples who want to learn how a Latinx holiday may intersect with their beliefs) and why we’re doing it (for the Latinx community and to educate those who aren’t) people were open and willing to participate. I think that’s what intercultural work needs the most: clear definitions and explicit intentions. If we aren’t specific about why we’re centering one group or one event or one X, Y, Z it opens the door to misunderstanding and hurt. I was pleasantly surprised to experience a centered, cultural event without misunderstanding.

During the decolonization panel, there were so many ah-ha moments, but what I think really stood out to the people that came (who were predominately not Latinx or Indigenous) was that changing how we think of holidays or events to be more inclusive is really easy, and no one has to sacrifice anything.
​
What’s coming up next for you?
I am off to NYC to lay the groundwork for my newest play Bound being produced with Amerinda, Inc. Bound is a play about how the Indigenous peoples of these lands and their sovereignty predates both the United States and Mexico. I will also be directing the piece in April of 2019, so I am so excited for this play to make its debut! I will be directing again in Tulsa in the late winter before I hop over to NYC. Additionally, I am working on a couple of new plays, but I am the most excited about a play that explores intergenerational trauma in a format that weaves in and out of time.

Tara Moses is a director, playwright, and Artistic Director of Binge Theatre Company, the world’s first online theatre company. First and foremost a citizen of the Seminole Nation of Oklahoma, her work focuses on the experiences of Native Americans and other marginalized groups with a mission to challenge the American Dream with the American Reality. Learn more about Tara here.