FELLOWS IN THE FIELD: CONSIDERING THE COMPLEXITIES OF IDENTITY

ILI Fellow Shin Yu Pai visited Bhutan and Taiwan in 2018. Here are her reflections on those travels and experiences, and how they connect to her role as a cultural leader in her field. 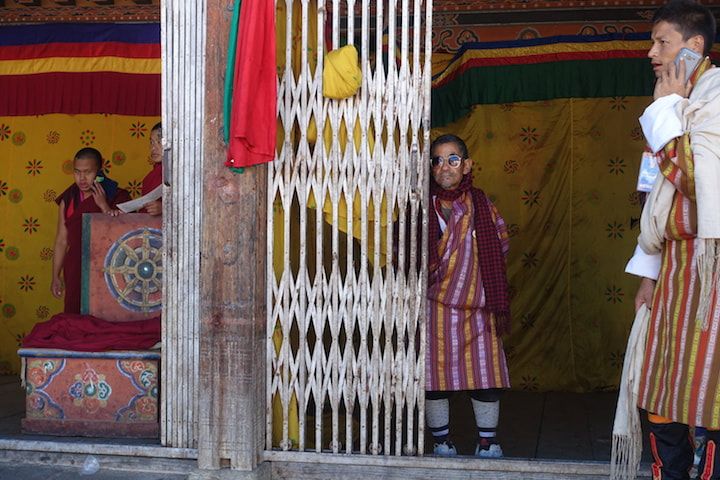 Photo by Shin Yu Pai
Please tell us about the context for your travels. Why now? Where did you go and why did you choose those locations?
​I work for Atlas Obscura, a digital media start-up that focuses its mission on exploration, adventure, curiosity, and wonder. Much of our work looks at celebrating the uniqueness of place. I recently staffed a two-week trip to Bhutan for my company and traveled with a group of 16 individuals drawn from across the United States, ranging in age from late 20s to mid-70s. I served as a kind of on-the-ground fixer, ensuring that the trip ran smoothly and providing extra support to our team of guides.

After Bhutan, I traveled to Taiwan, my parents’ native home, to meet up with my 77-year-old father in his home town to visit his extended family. My dad traveled from California to meet me. He likes to say to relatives that he “didn’t really want to go, but his daughter scolded him.” It’s true. Our loved ones are aging and two of my uncles passed away in recent years. My remaining aunts and uncles are also rapidly aging and confronting various health issues. I felt it was important for each of us to return, to revisit those connections.
​
My visit to Taiwan coincided with a special festival that only occurs every few years—the Wang Yeh boat-burning festival, which involves the building of a beautiful wooden boat by community members that is then burned to the ground in a ritual act that involves sending the negative energy, wishes, and karma of the past years up to heaven with the Wang Yeh boat captain. It’s a stunning act that is both creative and destructive.

“I’ve always been drawn to off-the-beaten path discoveries, but since joining the staff of Atlas Obscura, I’ve been more deliberate about seeking out these experiences that inspire wonder.”

I persuaded my dad to visit Rainbow Village in Taichung with me, an online entry in Atlas Obscura. Though initially extremely skeptical about the historical significance and value of this community, after seeing the graffitied alleyways of this neighborhood, he changed his mind about the value of preserving the old officer’s quarters.

I capped off my trip with a two-day tour to Kinmen Island, a part of Taiwan that is hotly contested. Located off the coast of China, much of Taiwan’s military history endures here, as well as amazing architectural history that I haven’t seen in other parts of Taiwan. 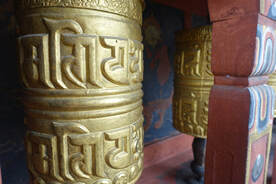 How did “Interculturality” fit into this experience for you?
Bhutan has been very intentional and cautious about opening up its borders to tourism in order to preserve its heritage and culture. The style of Buddhism that is deeply rooted in the Bhutanese way of seeing and living came directly from Tibet centuries ago and the Bhutanese people speak Dzongkha, a Tibetan language. It’s very complex to think about the ways in which Bhutan is currently evolving and emerging — you have the notion of Gross National Happiness that is a national initiative and a paradigm for alternative development. On the other hand, there is poverty and unemployment in Bhutan – the country is still paving and building roads, and creating infrastructure. Bhutan is also seeing the rapid effects of melting glaciers and climate change which will impact its hydropower and economy. When one pairs these two ideas together, the question that arises for me is, prosperity, or happiness for who?

“In Taiwan, thinking about culture means accounting for outside influences, as well as the presence of indigenous tribal people.”

Taiwan is an epicenter of interculturality. The island has been colonized at various times by the Dutch, Portuguese, Japanese, and Chinese, and as a result, Taiwanese identity is incredibly complex. Thinking about culture in this space means accounting for these influences, as well as the presence of indigenous tribal people. For me, interculturality in Taiwan means understanding my own position as an outsider, or American-born Taiwanese, and what parts of the cultural traditions resonate in me or call me home, and knowing where I differentiate from the culture(s) and remain a part of the diaspora.
​
How do you see this experience as related to your own leadership in arts and culture work?
In order to lead, I need to understand who I am and where I come from. These particular journeys took me back to important parts of my lineage or ancestry. I took vows of Buddhist refuge twenty years ago with Gangteng Tulku Rinpoche, a visiting Bhutanese teacher who initiated me onto the Buddhist path when I was a graduate student at the Naropa Institute in Boulder, Colorado. So taking that journey to the spiritual motherland was very much about reconnecting to that part of my commitment and awareness of where mindfulness and lived values fit into how I want to be in the world, as a human being and leader doing the work that I do.I was born and grew up in the U.S., but going “home” to Taiwan, is always an exercise in considering the complexity of identities and cultivating empathy — honoring the effort and care that it takes to reach across cultural, generational, and linguistic barriers to forge understanding and connection, or love.

What were the most surprising outcomes for you? What were some of the a-ha moments for the people you were with?
Everyone on my trip was going through their own individual journey and I can’t speak to what their a-ha moments were. I know that two-thirds of the group had specifically Buddhist interests, and I think participating in sacred rituals like consecrating prayer flags and raising them in the landscape were quite powerful. Offering butter lamps at Gangtey Monastery was very meaningful. These were moments of profound beauty, abundance, and generosity that were bestowed upon us as guests in a foreign land. 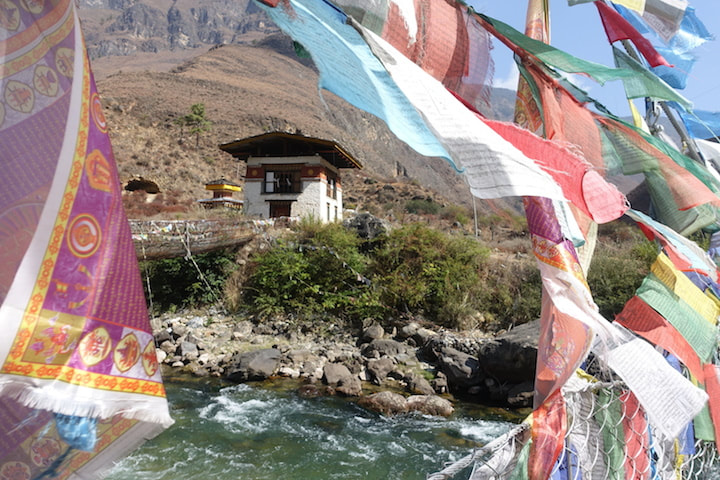 Photo by Shin Yu Pai
Contemplating gender and masculinity in Bhutan was very very interesting for me. It’s a patriarchal culture and gender equality remains an issue. One of our guides had recently competed in the Strongest Man in Bhutan contest and performed very well in herculean tasks that involved carrying massive amounts of weight across impressive distances and demonstrations of strength. This same guide, Sonam Tenzin, showed great presence and tenderness in keeping our group safe and caring for us. He took one of our travelers to the emergency room on our first day, when she developed an enlarged pupil and may have been at risk for a detached retina. Tenzin also took me to the emergency room and interpreted for me with the medical worker, after I fell into an irrigation ditch during a hike and needed a tetanus shot. We had a traveler who had mobility issues and walked with assistive devices. Every time I turned around, Tenzin was assisting this guest, holding his hand, offering his arm, there every step of the way. He even carried this 235-pound man on his back down a dirt hill. Tenzin, who is in his late 20s, served us as a caregiver with no shame or stigma. He also shared parts of his personal story with me and his openness and vulnerability presented to me another way of being as a man — a counterpoint to the kind of toxic masculinity that pervades everyday life in America. 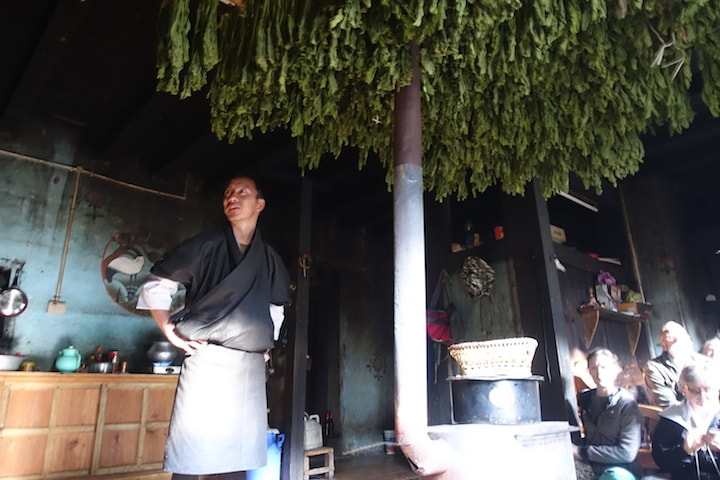 Visiting a traditional Bhutanese farmhouse for a cooking demonstration. Mustard greens drying in the kitchen. Photo by Shin Yu Pai
What’s coming up next for you? We’ve seen a few social media posts lately about new exciting roles. How are you thinking about everything tying together?
A lot of opportunities have been flowing my direction. I’ve been invited to serve as an advisor for the King Street Station in Seattle, an arts and cultural space managed by the City of Seattle’s Office of Arts and Culture. I’m also serving as an artist-in-residence for the Pacific Science Center where I’ll likely get to work closely with a scientist for the next three months. I’ll also be doing some work with local public radio – I’ve recently been fortunate to be included in the first cohort of a nerdy supper club of journalist: KOUW’s Curiosity Club.
All of this work is bringing me into contact with artists and arts leaders who are often from  underrepresented backgrounds, and in scientific circles that are new to me. I’m excited to have cross-disciplinary conversations with subject area experts who focus on work that is quite different than my own and bringing those connections into work that I am already exploring. 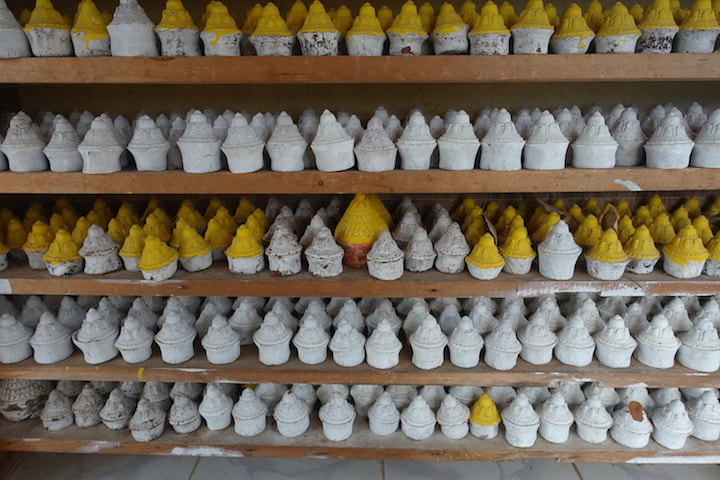 Tsa tsa offerings – traditional Buddhist art often placed in sacred places. Photo by Shin Yu Pai
Shin Yu Pai is an award-winning writer, artist, and cultural worker. She is fourth Poet Laureate of the City of Redmond and worked with King County’s Equity & Social Justice Initiative to use poetry as a tool to promote racial dialogue. Currently, she curates and produces events for Atlas Obscura, as Head of the Obscura Society. Learn more about Shin Yu here.