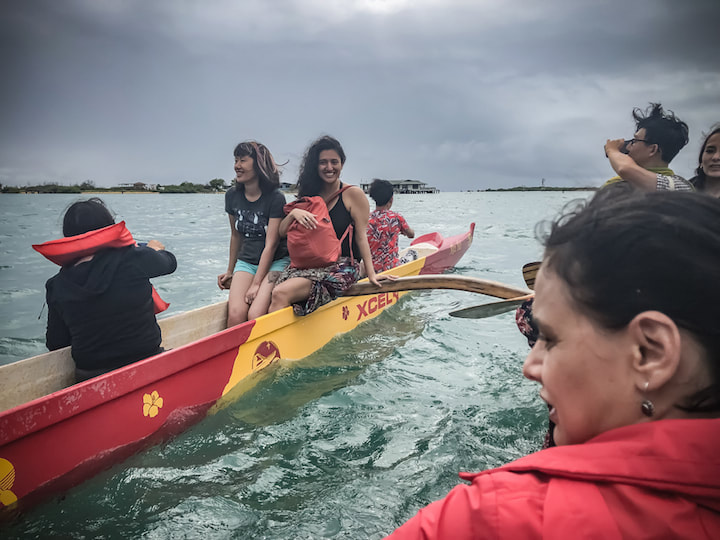 2018 was the year I lovingly nicknamed
“the year I cried at conferences.”

I had just moved to Philadelphia from Dallas after living and working for over two years as the artist-in-residence at Trans.lation Vickery Meadow, and I felt within me both a wall of numbness and a wave of grief. Geographic distance and class comfort gave me the opportunity to process some deeply traumatic experiences resulting from living and working in a neighborhood that vibrated with the daily violence of policing, displacement, and poverty. Those days, I responded by overworking myself so that I could push aside my horror and grief that bubbled up at inopportune moments.

Conference sessions, however, were places where my mind would drift to flashbacks—the homeless encampment behind our storefront, the police that roamed the streets with impunity, and the homeless refugee from Sudan who gave up on life on a cold Martin Luther King Jr. day. As I listened to speakers discuss the task of building communities free of violence, I thought about what that work looked like in reality. The salt water wave that lived within me and wore at my thin pretenses would break through and become small rivulets running down my face.

One conference session where this occurred was Leslie Kimiko Ward’s keynote at the Artplace America Conference held in Louisville, Kentucky. She introduced her 1000 Cranes for Alaska project, a project she began when she witnessed the drowning death of a resident of a remote Alaska Native village. As the project gained in recognition, she became known as the “suicide artist”, and people both joined the project in support as well as wrote her about their own struggles with suicide. After a year of such notoriety, she left to work on an organic farm in the Pacific Northwest for a few years in order to work through all the experiences that people had shared with her. It had become too much.

“I can feel all of you hurting,” she told the crowded room. I thought about her speech often that year, and wondered how many years I would need to spend out to pasture on the proverbial organic farm before I felt that I had returned to myself.

What I didn’t expect was the ways in which it would address the spiritual crisis swirling within me.

When I began the Intercultural Leadership Institute (ILI) during this year of crying at conferences, I expected all the trappings of a professional fellowship—seminars, networking, a step-by-step manual on how to become a better arts nonprofit administrator. What I didn’t expect was the ways in which it would address the spiritual crisis swirling within me. ILI showed me communities working to heal at a moment when I was searching for ways to heal myself.

Our first intensive retreat took place in Lakota territory, with trips out to the Pine Ridge reservation. It was my first extended time on a reservation, and I felt grateful for the trust and care that the partners exhibited from the beginning to welcome us into such sacred sites and ceremonies. After learning about Lakota Sioux philosophies as well as the violent ways in which the United States government carried out its genocidal project against indigenous communities, we packed into vans and drove out to Pe’ Sla, a sacred site in the Black Hills that the Lakota Sioux had organized to buy back from the United States government. We stood in the tall grasses on the mountaintop as Lakota Sioux elder Jace Cuney Decory led us in ceremony.

“Leave your sadness here,” she instructed, and I felt something within me fall away on this sacred mountain, a testimony to the history, struggle, and resilience of the Lakota people. The next day, we visited Wounded Knee, and we were once again solemnly confronted with the violence committed by the United States settler colonial government. But within tragedy we also met survivors, leaders of the American Indian Movement who spoke of triumph amidst atrocity. We visited Thunder Valley Community Development Corporation, where we witnessed the reclaiming of land for community agriculture and affordable housing that harkened to traditional ways of living. The work at Thunder Valley CDC was a powerful example of an indigenous community building alternative models for economic sovereignty. Decolonization, as Eve Tuck and K. Wayne Yang remind us, is first and foremost about land[1]. As Thunder Valley CDC models, it is also about shedding violent Western paradigms in relationship to land stewardship.

That winter, after the initial retreat in Lakota territory, I briefly found myself in Berlin, walking through the wooded areas that surrounded the Sachsenhausen concentration camp, once again feeling the quiet gravity of history. I thought about Mel Chin’s Revival Field, a project where super hyperaccumulator plants leached heavy metals from contaminated soil[2]. I thought about my immigrant mother and her daily practice of tending a garden filled with blooms from a continent away, an ongoing effort to remake home in a land that at times treated her with contempt. I wondered about land’s limitations and potential for witness, testimony, and repair in the wake of the historical violences that we carried.

It wasn’t until the second retreat in Hawai’i that I encountered language that wove together these questions and experiences. ​

I encountered it on a cloudy day, when we boarded canoes and rowed out to Mokauea, an island off the shore of Honolulu. On that island, the poet and scholar Jamaica Osorio recounted a myth illustrating the idea of aloha ‘āina, the idea that love, relationships, and land were interconnected. Osorio spoke of the way that colonization and military occupation had not only broken apart the land, changed the waterways on which we stood, but also broken apart the ability of generations to speak to and relate to one another. Cultural reclamation and land reclamation became synonymous. Our sense of place is created by the people we love, and our love in turn tills the soil beneath our feet.

Back on the main island, I stood underneath a banyan tree and traced the curves of its stringy branches drooping to the ground and establishing new roots. It felt like a metaphor for the constant migratory process that defined my life, learning how to acknowledge the place that gave birth to you while rerooting elsewhere. From Thunder Valley CDC to Kōkua Kalihi Valley Farm, a farm in Hawai’i focused on traditional foods and community service, the sites we visited left an indelible understanding of indigenous approaches to making place and creating community.

At the close of the retreat in Hawai’i, all of us walked out into the ocean, and dipped ourselves under three times to leave our trouble in the salt water, much as we had left it on the sacred mountaintop. As I stood watching the backs of my peers standing in the water and staring silently into the vast distance, I thought that this was the true meaning of interculturality: recognizing the sublime vastness of the world before us and the different experiences that it held. In the spirit of aloha ‘āina, interculturality also emerged within the relationships we built with each other, and with our respective relationships to land. We had momentarily created, in Osorio’s words, a “fishing net of intimacy”, a net that caught me during a moment of spiritual freefall. In San Antonio, we were asked if the fellowship had spiritually changed us, which seems like a tall order for a fellowship created within the construct of nonprofit professional development. But the answer is yes, and, mahalo.